I've decided to post what I think will be the Digital Marketing Trends 2014 - and I've intentionally NOT done a huge amount of research on what the experts think!

Quite the opposite - I've been taking a wee break from Digital over the holiday period to get some fresh thoughts going. To that extent, I have been reading dark and brutal crime novels, watched Hellraiser and Hellbound - Hellraiser 2, re-watched The Bridge (series 1), and went to see the Louise Bourgeois exhibition at the Scottish National Gallery of Modern Art (which incidentally gives me a reason to post the awesome picture on the right!)

Having removed myself from the thick of what I do professionally every day, I present to you the perhaps least scientific and most subjective key digital marketing trends for the new year (disclaimer: as I see them).

It used to be the case that for every brand, sub brand, by country, by business area, by campaign, etc, firms immediately created individual Twitter and Facebook accounts. 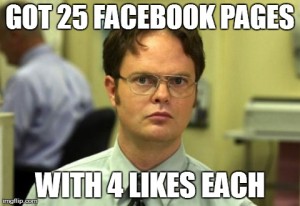 I've noticed this especially for films (I've worked on social for some) but also FMCG, and I've fought a few battles with clients who wanted a social media account for every single campaign, country, blah blah.

So they launch these pages, run non-integrated social acquisition campaigns, and then broadcast top down dull messages that don't get any traction and that no one is interested in. If they're using a dodgy agency, they may also buy cheap Facebook Likes.

Typically, they will fail to actually appoint some new content people / social media staff to do the considerable work required to build an engaged community of brand advocates on the 25 new accounts they've asked their agency to set up. Because, like, social media is EASY as all you do is sit on Facebook all day!! No skill required AT ALL!

I think in 2014 we'll see more consolidation of companies' social accounts as they realise that this 'social media strategy' is completely pointless and that those cheap likes and followers have no value since they'll never ever buy from you. Just chuck money out the window instead - same thing.

In 2014, then, smart brands will consolidate their social pages and might even close some of them (as they've no one to maintain them all).

Why, they may even start using social in a strategic way and start with their business objective first, before setting up yet another social account!

Trend 2: Video will RISE AND RISE due to mobile first consumption

We know that mobile has, or will shortly be, overtaking desktop access.

And what is the ideal, platform-agnostic media form for seamless multichannel consumption? Yes, it's VIDEO. I bet that nowadays YouTube is viewed more on mobile / tablet devices than on desktops. Who doesn't like funny videos? Such as this classic and awkward video of people posing for what they think is a still camera, when it's in fact a video recording 😀 !

This gem (and many others) were shown to me or viewed by me on a smartphone. It's just the ideal device for short videos - even the screen size of modern phones is just about perfect for the format. And yes, when I get stuck on some video game or other I grab my tablet and fire up YouTube 😀

Throw in the fact that YouTube is owned by Google, and with Google aiming for world domination, you can bet that video will be one of THE digital marketing trends 2014 - and a surefire way to strengthen your digital brand and your search engine visibility - not least because YouTube will be a key focus for Google in their quest to get a big slice of mobile ad revenue.

I recognised the increasing importance of video / YouTube back in 2011 while working as VisitScotland's Social Media Manager. Together with my awesome ex-colleague Leanne, we managed to persuade YouTube to assign the channel name /visitscotland over to us, which some random person had registered but had never used. This sort of thing isn't normally possible, at all - you can't just get someone else's account!

But I wanted the exact brand URL and nothing else would do. Nothing. Else. Not /visitscotlandTV, /visitscotlandmedia, or whatever other substitute. No. We just wouldn't let go and moved heaven and earth, pulling out all the tricks in the book (nothing dodgy mind you!).

And YES, we finally managed to do it, and as a result the channel /visitscotland was fully aligned with the overall VisitScotland brand ecosystem, and now has nearly 1.5 million views 🙂

Trend 3: All the overhyped, useless digital 'innovations' will GO AWAY.

Rant alert! My final prediction is that anything pointless that supposedly is the next big thing, but that consumers are simply not interested in, will go away.

Maybe it's just me secretly hoping that these non-starters will leave me alone and I don't have to see or hear from them ever again.

And with that I conclude my totally non-scientific, purely subjective and rather random predictions for Digital Marketing in 2014.

I'm certainly excited and can't wait to see what actually is going to happen! Digital is always fresh, ever-changing, often unpredictable, and we'll be in for another GREAT ride this year 🙂