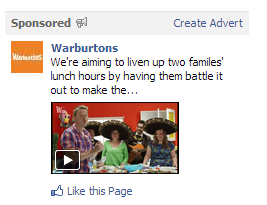 Occasionally, I come across Facebook Fails - brands managing their Facebook pages in a way that damages their reputation.

One current example is Warburtons, and I'll explain why in a moment.

I spotted their video ad on Facebook - displayed here on the left - and clicked on it (I like tasty bread and was in discovery mode 🙂 ). I never 'Like' pages based on an ad alone, so I clicked on the link and arrived at their Facebook page.

The first thing I saw was loads of people criticising Warburtons for a £25k donation to the Conservative party (there's a campaign against Warburtons because of it) - mainly in comments posted as a response to the page's updates. There were also a few users who had posted directly onto the wall.

To all such comments, Warburtons had publicly replied with the exact same stock response -  multiple times:

Hi xx, we wanted to acknowledge your comment. We do care about what our customers think and have listened to your feedback.

You can see their stock response in action below: 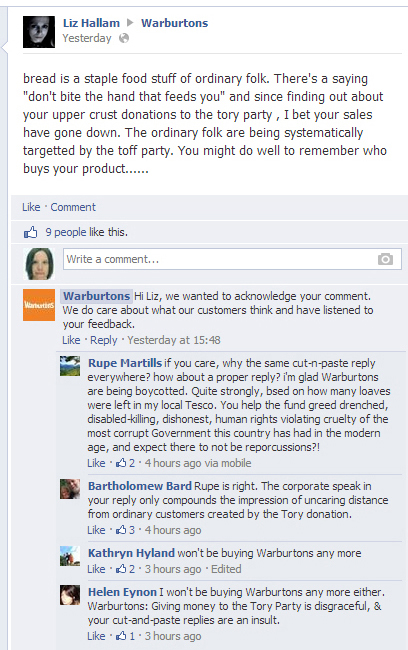 Simple. The brand, Warburtons, was / is using paid advertising (the video ad) to drive traffic to the Warburtons Facebook page, which is laden with negative PR against them, causing reputational damage:

In effect, Warburtons were promoting with their own money the 'Boycott Warburtons' campaign. They also raised considerable awareness of the fact that they have strong links with the Conservative Party (I didn't even know prior to clicking on the ad that they had donated money to the Tories)! No doubt the paid advertising also drove new users to criticise them on the Warburtons Facebook page, thus fanning the flames.

Why didn't anyone at least switch off the paid campaign?