Inspired by the recent YouTube hit Teens react to 90s Internet, I've come up with my own list of 90s technologies and gadgets that I used back in the days. Older readers may recognise some of these 90s tech dinosaurs... 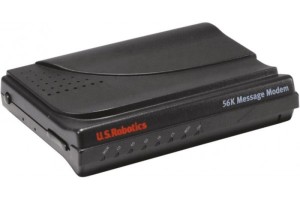 If you wanted to 'get on the Internet' for much of the 90s, you had to dial in via your phone line (using a dial-up modem). Since the modem plugged into your phone line, your telephone landline was engaged whenever you were on the WWW (yes, that's the WWW, not the Internet, though the latter term has become synonymous with the former). It also meant that typically, you would connect only for a specific reason - e.g. to download your email (using Netscape Messenger, part of Netscape Navigator). You'd then read and reply to emails offline and briefly re-connect to send them, before disconnecting again. I eventually upgraded to ISDN (with Deutsche Telekom) which meant that you could both be online and still receive phone calls. 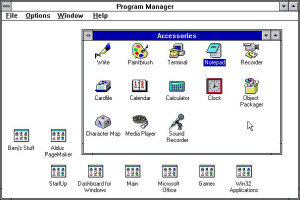 My first computer, a second hand Intel 486, originally ran Windows 3.1. (I didn't get my hands on the revolutionary Windows 95 until a bit later. It was all very, very expensive in those days, and I was a poor student). 3.1 had a graphical user interface, rather than being text-based and is generally considered one of the first operating systems for multimedia PCs* (i.e. away from text only to also support video playback and sound). Windows 3.1 even allowed you to drag and drop icons, which hadn't previously been possible! It's hard to imagine what it was like - but if you consider that the OS only took up 10-15MB on your hard drive (compared to Windows 7, which takes up 16-20GB - an increase of over 136,000%), you'll get an idea of how basic and slow it all was. Really basic, and really slow.

*yes, I used Macs at Uni in the 90s, but PCs were cheaper so I settled on them.

Pine was a text-based email client originally developed for UNIX in 1989, by the University of Washington. If you were at University in the 90s and geeky enough to be interested in the newfangled technology of the Internet, chances are you'll have encountered old-skool UNIX terminals running Pine. I used it as a student both at Cologne Uni and Uni of North London (now London Met). They even kept the UNIX terminals for a good few years after introducing Windows PCs. There was an IT lab with shiny new PCs in the front room, and in the back room a few rows of UNIX terminals mainly for the purpose of sending emails via Pine. I can't for the life of me imagine what exactly I would have emailed about - few people I knew actually had an email address. It was more like sending letters, only in electronic form. Nothing like email today. Regardless, I used it all the time (for philosophical, lengthy 'electronic letters' to my friends, and for communicating with some boys I fancied), and it got me hooked on digital communications and technology in general. I knew then that this was going to be my destiny (and got a cyborg tattoo around this time, as I truly felt machinic).

My first mobile, or 'Handy', as they are called in Germany, was a Siemens S6.  I still lived in Germany in 1997 and this was the mobile I bought. It had a really, really shrill ringtone, and the battery lasted about 5 seconds. Mobile phones weren't as ubiquitous as they are today and you wouldn't really see many people with one. Having a mobile was more of a status symbol than anything else - you didn't use your mobile anywhere as much as you do nowadays. For me, it was more like an 'emergency phone' you had with you just in case, though I'm sure professionals did use their mobiles more frequently for work and such (I was still a student so had not much reason to call anyone while out and about. I had the landline to talk with friends etc.- actually making a call on your mobile was prohibitively expensive). 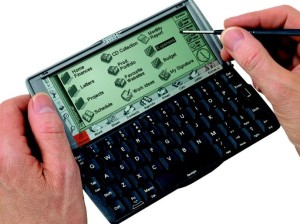 I got this PDA (Personal Digital Assistant) in 1997 or 98, off ebay. It's an ancient forerunner of the modern smartphone - it had apps for word processing, spreadsheets, contacts, calendar, etc., but that was pretty much it. It wasn't actually internet-enabled (this was in the dark ages, no DSL etc.) but it had an infrared port so you could connect to a friend's Psion and swap / transfer files. The Psion 5 was of very little practical use to me - in reality, you couldn't do proper work on it (despite the keyboard) and I think I eventually sold it. Come to think of it, I don't really know why I bought it in the first place - I think I liked its look and I just had a passion for digital technology and gadgets and I suppose was what you could call an 'early adopter'.

The common thread running through most of my 90s geekery is that much of the technology was pretty much new and pioneering. These things had never existed before and it was truly a whole new world, and that had a profound effect on me.

It reminds me of the only other similarly large-scale technology shift prior to the Internet - the arrival of moving image, starting with early cinema in the late 19th century. In 1895, when watching a 50 seconds film of a train arriving at a station for the first time, audiences were scared and shocked upon seeing the train 'racing towards them'. People didn't understand that this train was on a screen, and simply a moving image - it just didn't compute, because a moving image of the world had never been seen before. Consequently people felt physically involved, reacting physically and emotionally.

In a similar vein, to this day, I remember how touched I was the first time someone paid me a compliment in IRC chat approx. 1996. It felt very bizarre to feel emotionally connected to someone through plain text, via a machine. I knew then that this stuff and the Internet was going to be HUGE, and I wanted to be part of it - and have been ever since!

Bonus: The Lumière Brothers, Arrival of the Train (1895)