This weekend past, I experienced some excellent word of mouth marketing from Halfords. It's not a brand I usually have much to do with (my car being a bit of a banger, and my view of cars being largely functional - all that matters is that it's fast!) so the fact that they nearly got me to do some free word of mouth marketing for them is significant. 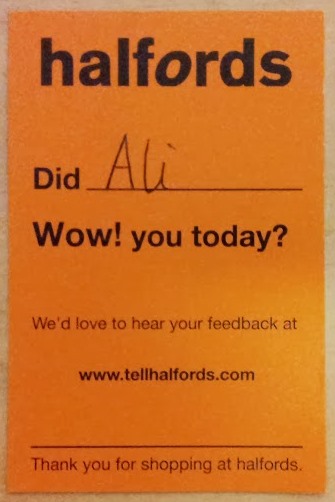 Check out the card on the left, which they gave me after one of their staff topped up the oil in my car FOR FREE!

The member of staff in question, Ali, was extremely helpful and friendly and pretty much provided a professional service (topping up the oil that I had bought at the store) FREE of charge. It felt like they were giving me extra thus adding great value to my experience (have I mentioned it was FREE of charge?).

Come to think of it, it wasn't word of mouth marketing alone. It wasn't just about the card and how they delivered an excellent customer experience with the aim of turning me into a brand advocate via word of mouth, while smartly connecting offline to online (though that's an excellent strategy right there!).

Robert Cialdini is a professor of Psychology and Marketing and back in 1984 he argued that influence can be exerted using six psychological principles of persuasion. These strategies, also called ‘weapons of influence’, are effective as they respond to emotional needs. I.e. they push internal buttons thus almost compelling its 'victims' towards a desired outcome.

To put it bluntly - you feel you HAVE to do something (the desired action) when these weapons are being used on you.

This may sound incredible, especially if you are not a fan of psychology and psychological theories, but his findings are in fact a result of extensive evidence-based research and analysis. Cialdini not only conducted experimental studies but also immersed himself in the world of marketing to study the techniques of salespeople, fund raisers, recruiters, advertisers, marketers, and so on. He calls these people "compliance professionals" – a perfect term if there ever was one!

My own approach to Marketing is heavily influenced by Cialdini, and I recommended his book when being interviewed last year as part of econsultancy's #TheDigitals awards.

Anyhow, I digress - a full exploration of Cialdini should be left for another post.

My point is that Halfords didn't just innocently use word of mouth marketing. They deployed the first principle of persuasion, Reciprocity. I'll explain the mechanism below. 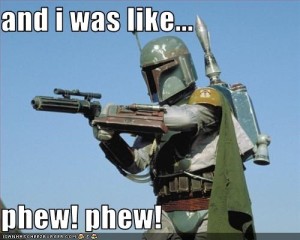 Reciprocity is based on the concept of reciprocal obligation. It works by triggering a feeling of indebtedness arising from being given something first.

And what was the compliant action implicitly asked of me? Yes, to hear my feedback about Ali on www.tellhalfords.com. And I liked Ali, so how could I NOT do it? I really must do it, after what he did for me! I must do it IMMEDIATELY and it's playing on my mind, whenever I see that orange card. Because yes, Ali did 'wow' me today and Halfords are asking so nicely, and I feel guilty for not doing it. In fact, I've been carrying this immense guilt around me for days now 😛

Saying that, I feel there's light at the end of the tunnel and soon I won't feel bad any more now that I've honoured Halfords and their site with an entire blog post!